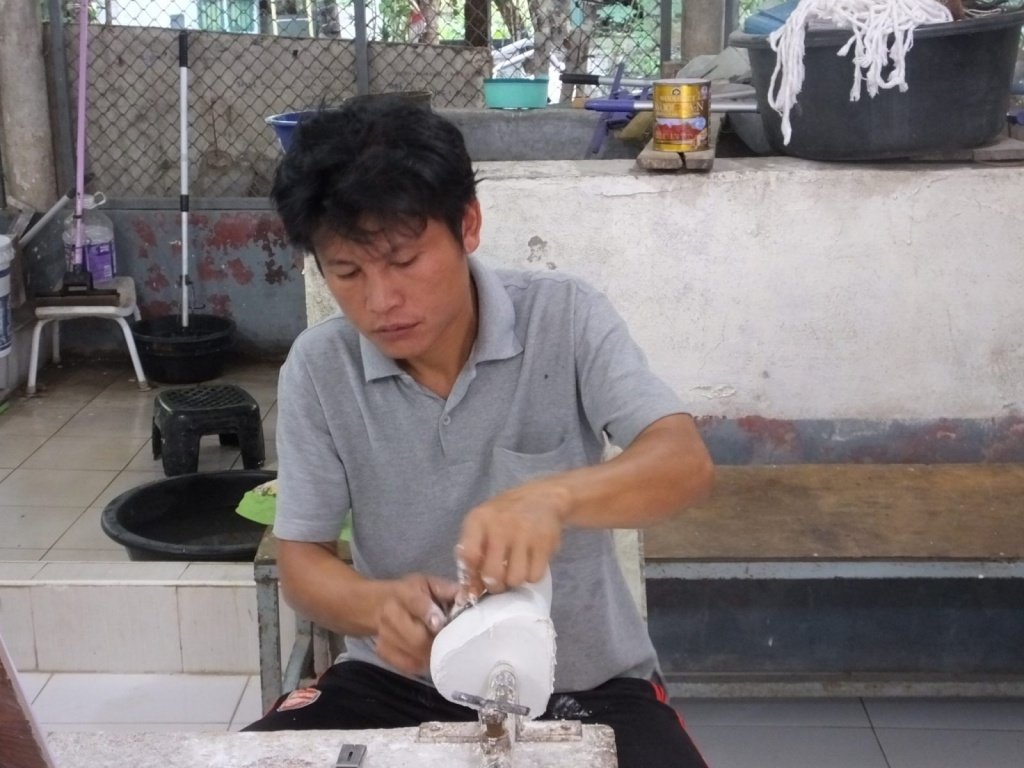 When he went indside the forest with his friends, looking for vegetables, he accidently stepped on a landmine and unfortunately lost his right leg. He was 20. “I could not help feeling sad because of my situation but tried to overcome the sadness by working hard.” Now he works with Mae Tao Clinic after learning to make prosthetic legs, helping numerous handicapped people. 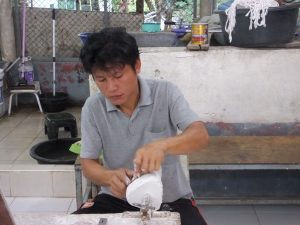 Saw Hla Htun is 39-year-old and single. He is from Karen State (Kayin State),[1] Burma/ Myanmar but lives in Thailand. Due to the continuous armed conflict between the Burma army and ethnic armed group[2] in his town, Saw Hla Htun and his family had to leave Burma. He was 17-year-old when he came to Thailand. His family found a safe place to live in Maw Kwee, Thailand, near the Thai-Burma border. To get there, they had to walk for three days.

Saw Hla Htun and his family lived happily until a terrible accident happened to him. After two years of living in Maw Kwee in peace, Saw Hla Htun, unfortunately, lost his right leg when he was 20. He went inside the forest with his friends, looking for vegetables when he accidentally stepped on a landmine. They never expected there would be landmines in the forest. He was sent to the clinic in Mae La refugee camp and the health worker in Mae La Hospital immediately referred him to Mae Sot General Hospital (MSGH)[3] to treat his injury. He stayed at MSGH for over 15 days, then went back to Mae La for a week to receive follow-up medical care for his leg. After the medical treatment, he went back to Maw Kwee and did farming for four years. He could not help feeling sad because of his situation but tried to overcome the sadness by working hard in the farm. 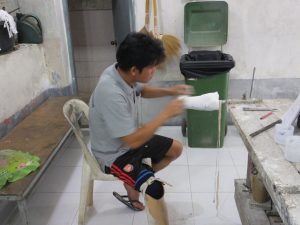 One day he received a phone call from one of the social workers who work for handicapped people in Mae La Refugee Camp. The social worker told him to join and work with the team. Saw Hla Htun accepted the offer and was sent to Mae Tao Clinic to attend a six-months theoretical prosthetic training that teaches how to make prosthetic legs. After the theoretical training, he attended the 1.5 year practical-theoretical combined training which is carried out in collaboration with Karen Handicapped Welfare Association (KHWA). During the practical session, he was asked to go to the refugee camps or villages to find people in need of prosthetic legs.

He has been working with Mae Tao Clinic’s Prosthetic Department since 2006. While working with MTC, he has learned a lot of skills and his life has been completely changed.

“Thanks to the Mae Tao Clinic, my life has been changed in many ways which also changed my attitude. I have obtained various skills here. Now I can tell I am good at making prosthetic legs. I love what I do here because I can help handicapped people like me.” Saw Hla Htun said. 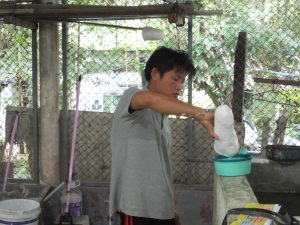 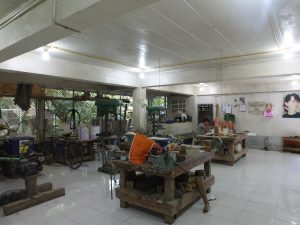 (This interview was conducted in October 2017)

[1]  Karen state (in Burmese Kayin) is a state of Burma/Myanmar. The capital city is Hpa-An, also spelt Pa-An. The relief of Karen State is mountainous with the Dawna Range running along the state in an NNW – SSE direction and the southern end of the Karen Hills in the northwest. It is bordered by Mae Hong Son, Tak, and Kanchanaburi provinces of Thailand to the east; Mon State and Bago Region to the west and south; Mandalay Region, Shan State and Kayah State to the north. (https://en.wikipedia.org/wiki/Kayin_State)

[3] Mae Sot General Hospital (MSGH) is the Thai government hospital located in Mae Sot, Thailand. Our relationship with MSGH is now over 25 years strong. MTC transfers some complicated cases to the MSGH.