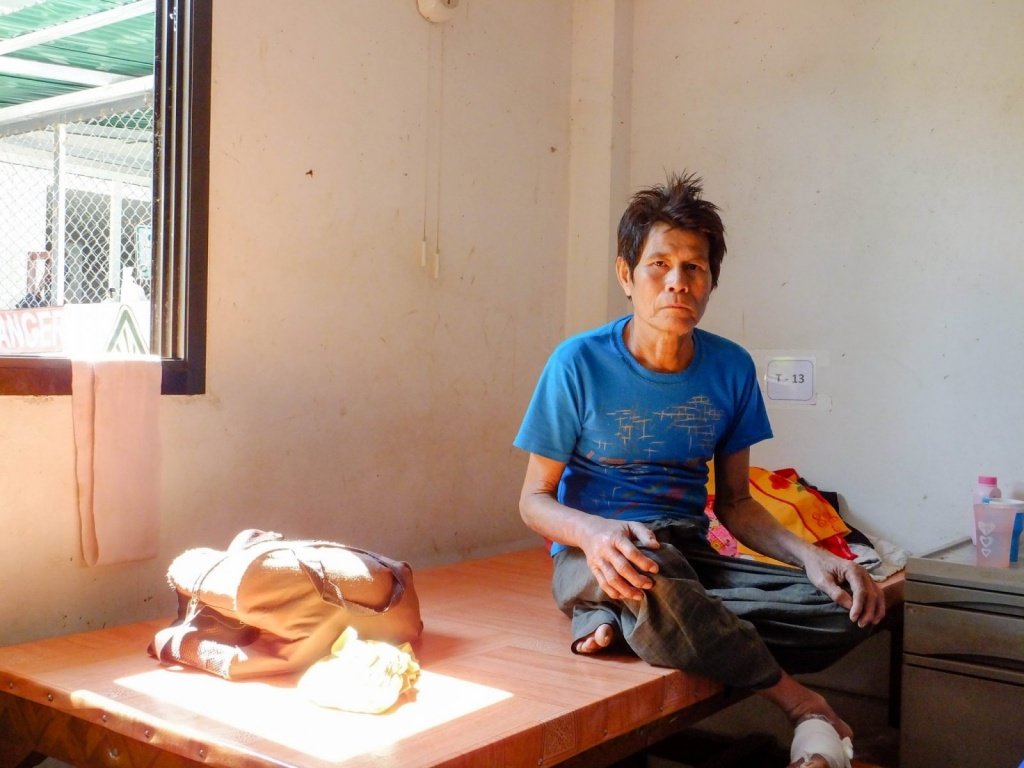 Soe Than has been working at one of the factories in Mae Sot, Thailand for 20 years. Since November, he’s been suffering from wounded top of his foot. He visited the MTC but the wound kept hurting badly and did not heal even after the treatment. So Soe Than visited the MTC again and the medic suspected that it can be diabetes. We are increasingly seeing more patients with chronic non-communicable diseases such as hypertension, diabetes or cardiovascular diseases. Non-communicable diseases are a challenge for us as they often involve lifelong treatment, costly investigations and regular follow-up. 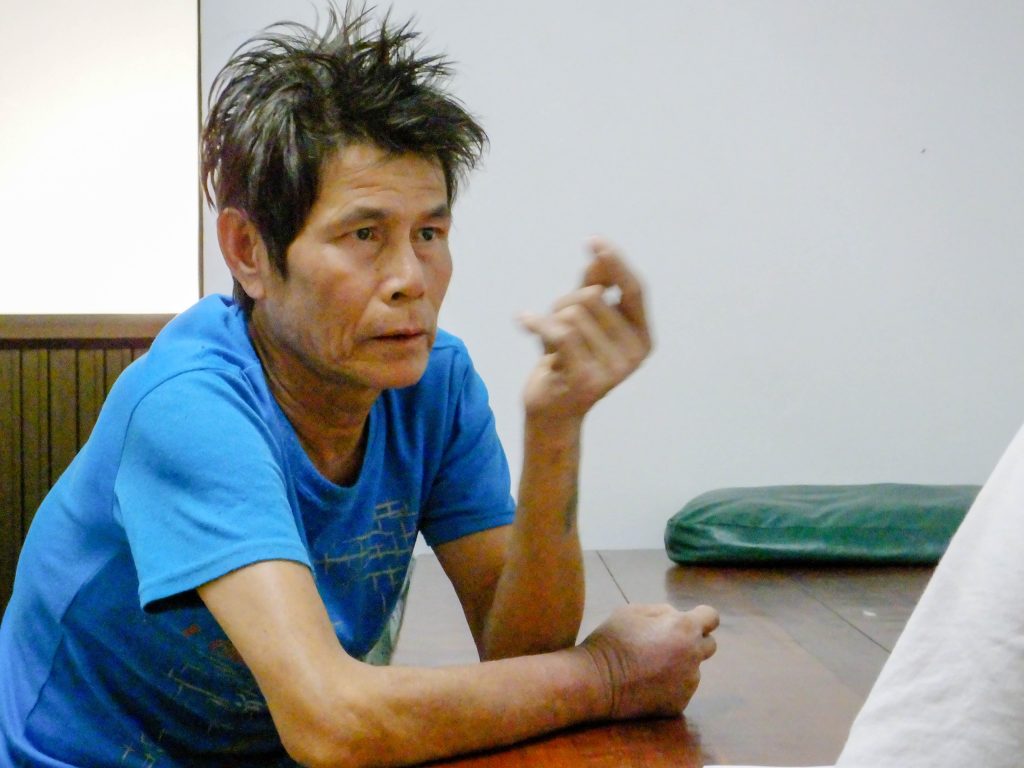 Soe Than is 50-year-old, Burman ethnicity.[1] He was born in Mawlamyine, Burma/Myanmar.[2] His parents passed away when he was 5-year-old. He does not have any relatives. He adopted a son when he was in Burma/Myanmar but he has not been able to talk with his son since his son went to Bangkok, Thailand to look for work. All Soe Than knows about his son is what he heard; his son found his birth mother in Bangkok.

Soe Than came to Mae Sot, [3] Thailand to look for a job. He has been working at one of the factories for 20 years. He met a new wife there and now have one daughter. His wife works at the same factory as well. His daughter is 7-year-old and attending one of the migrant schools in Mae Sot.

Soe Than makes THB 200 (USD 6,3) and his wife makes THB 150 (USD 4,7) per day. Both have a temporary work permit, as known as ‘pink cards’, which allows you to stay and work in Thailand but cannot travel other districts without permission.[4] They are staying at a temporary shelter where the factory owner provides to factory workers. Currently, there are around 200 workers living together.

Soe Than has visited Mae Tao Clinic whenever he has some health issues: previously for the wound in the hand, falling of eyesight (amblyopia), etc. He said that he cannot afford the medical expenses at the Thai hospital despite the fact that the government insurance covers some diseases but all. Though he can speak a little bit of Thai he cannot read or write. Like as a majority of patients at MTC, no language barrier and free healthcare service is the main reason why he visits the MTC. 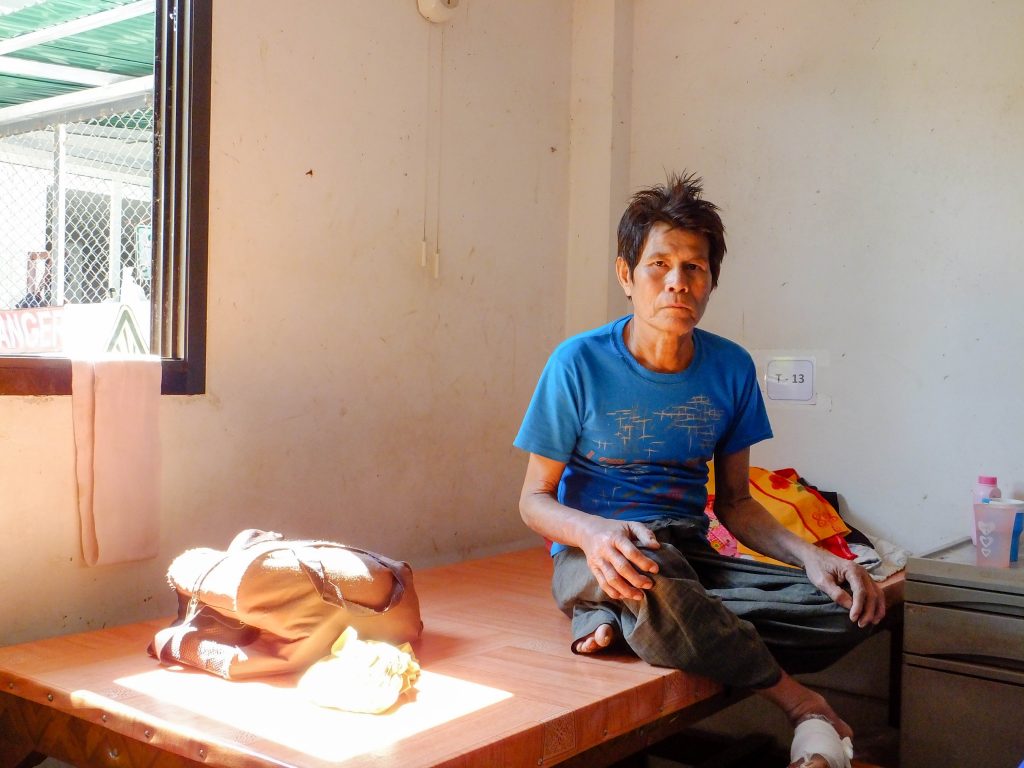 Since November, he’s been suffering from his wounded top of the foot. He visited the MTC in December 2017 and a medic put a dressing on the wound and prescribed antibiotics. But the wound kept hurting badly and didn’t heal so Soe Than visited the MTC again in January 2018. The medic suspected that it can be diabetes so asked the laboratory for the confirmation and it was correct. The medic referred his case to the Out-Patient Department. Unfortunately, MTC has limited medication for diabetes so the health staff at the OPD suggested that he needs to visit the Mae Sot Hospital, where he can get the appropriate medication, as Soe Than holds the legal work permit in Thailand. Soe Than visited the Mae Sot Hospital and was prescribed medicines, including insulin. But he could not afford to stay there so he came back to the MTC, having been taken care of; MTC health staff has given him an insulin shot regularly.

During his stay at the MTC since January 4, 2018, his wound and condition are getting better. Although his wife cannot visit him often as for the work and looking after their daughter, Soe Than is happy that he feels better day by day.

“I cannot thank enough to Mae Tao Clinic. The clinic has helped me a lot. All health staff and medics are kind and very patient. They work very hard and punctual;  they check the patient’s condition regularly and provide medicine and injection day and night. They really take good care of all patients. I cannot thank enough to the generous donors as well who support the clinic. Migrant workers like me really appreciate and are happy to have the clinic. I’d like to say ‘thank you’ to all donors with the bottom of my heart even though I have never seen them in person,” Soe Than said during the interview.

[1] Burma is a multiethnic, multilingual, and multicultural society. Officially, the country encompasses eight main ethnic groups, which the government has further divided into 135 different indigenous ethnic groups. According to CIA Factbook, the majority group Burman make up 68% of the country’s population of 55 million. The Burman group is the largest and culturally dominant group in Burma. [Burmalink: https://www.burmalink.org/background/burma/ethnic-groups/overview/]

[3] Mae Sot is a city in western Thailand that shares a border with Burma to the west. It is notable as a trade hub and for its substantial population of Burmese migrants and refugees. [Wikipedia: https://en.wikipedia.org/wiki/Mae_Sot]